Researching the Web ... One Integrated Link at a Time!

Back at Dartmouth College in the mid 70's, Anthropology professors often looked like the ancient cultures they studied! My, how the field has changed. Professor Michael Wesch and his Kansas State students now study the society and culture of the web. What does it really mean to be part of the YouTube Generation? Remember, YouTube and many of the web's advanced collaborative features are only a couple of years old. The question being asked is: Are we different, or do we relate differently because of the web?

While I am not smart enough to answer that question, during a recent sleepless night I watched the professor's recent talk given at the Library of Congress. This presentation, titled: An Anthropoligical Introduction to YouTube (watch via YouTube), will make you think. While the presentation is worth of the time spent just for curiousity's sake, if your job involves encouraging virtual collaboration for your company, then his lecture is a must watch. You need to understand the viral nature of culture ... good and/or bad.

In summary, here are some additional links to assist your research:

Googling LINUX in Many Languages (or LabView!)

Google has quietly released another tool. While this release does not have all the buzz that accompanied Chrome (see my post), I think most users will find this new Google Search service of greater use.

Google now allows one to search in one's native language (English in my case), and receive side by side results for another language . I've found this new search capability works best if you have some knowledge of the language in which your side by search is conducted. Let me demostrate ...

Google Side by Side Translated Search

If you need ask why this kind of search capability is valuable, your job must not have global requirements.

I have found that simple concept searches work the best.  You can still use Google syntax such as limiting files and sites as part of your search. Here are two screenshots which help further demonstrate the value of this feature. 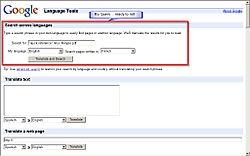 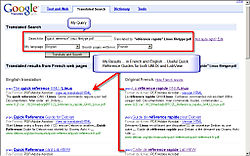 Okay, my moniker is the Northstar Nerd, thus ... the eternal debate, Geek or Nerd!?

Via Puneet Gupta's blog who is the CEO of Connectbeam I learned about a new site, TradeVibes, which reviews Silicon Valley startups. This web service reviews a phenomenal number of young companies, and allows you to read reviews, and give an opinion on the future of those same companies.

TradeVibes introduced me to CreateDebate. This Web 2.0 company allows any user to create debates where any netizen (i.e. user) may take part in the discussion. Thus, I pondered... what debate should I create as a test? Eureka!

You can chime in and give your six cents ... I've even linked Weird Al's White and Nerdy Video, with Donny Osmond dancing in the background! If this is not an incentive, I don't know what is! Vote now, vote often. If you want to watch the full YouTube Video, follow this link. 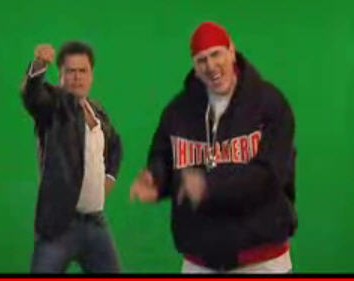 Powerpoint: Hate It, Love It, Live Link It!

Powerpoint, it's a tool we all love to hate, but use all the time. In my presentations I generally have a few concept slides, and then lots of demos ... more often than not which utilize live web content. In the past I've toggled back and forth between Powerpoint and my browser. Using LiveWeb I can insert live / dynamic web pages into a Powerpoint presentation. This removes the need for all that toggling, and potentially getting lost. One option of LiveWeb is I may define the size of the embedded web content. Thus, I could assign 90% of the Powerpoint page to my dynamic web content ... and keep 10% for a slide title and the ability to click forward within the presentation.

Even I have to admit, this is pretty cool. I've added three screenshots to this post which demonstrate LiveWeb. I learned of this Powerpoint Add-In via Microsoft's Sharepoint blogger, Michael Gannotti.

Click upon any screenshot image to view full size

It's Saturday morning. Over the past month the Northstar Nerd has blogged to you from Silicon Valley to the shores of Lake Superior, and even been interviewed by the New York Times. Now, it's time for something really important! From my northwoods cabin near the Canadian Border in northern Minnesota, it's time for Green Cheese!

That's right, I'll be competing along with many others in the weekly trivia radio show named Green Cheese, and you can join us! This show is a hoot, and recent weeks have found folks from as far away as Germany competing. All you need is a good brain ... and "no" computer. In other words, don't use your computer and the net to research answers. Finally, you need a moniker ... a good name. If you listen, this will become obvious why. Thus, link on over to KAXE on the net and listen to the live stream. If you miss the live show, you still might enjoy the show archive. KAXE is northern community supported radio ... thus no commercials, just great folk! Here are the details: