Many people understand that occasionally one needs to DeFrag your hard drive ... remove and reorganize the clutter ... then add new content. The same holds true for your brain. In slightly less than a month I will head to Denver, Colorado for DeFrag 2008. This conference bills itself as accelerating the "aha" moment in Enterprise 2.0. I will be both a speaker and panelist ... in other words I will engage and participate. My topics will revolve around social software in the enterprise.

My question to you ... have you defragged your brain recently. While this conference may not be perfect for you, please understand that my participation at DeFrag is on my own nickel and vacation time. As technologists we have a responsability to maintain our knowledge. For example, this past Spring I spent most of a weekend at BarCamp Minnesota. I don't want to imply that my company does not provide me technical training. In fact, next month on my company's dime I will attend some Sharepoint 2007 training. However, if you want to succeed, you need to invest in yourself. Think of it as an ongoing research and development project. In these tough economic times, you will be glad you did! 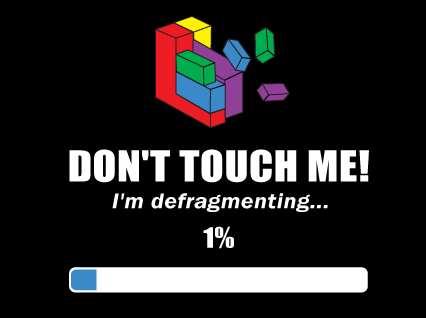 I used to think of LinkedIn as a glorified Rolodex. Although it was useful to maintain contacts with business associates, there was little value that a participant derived from this social network. Although it was nice to see how many contacts you had, other than consultants who were trying to sell themselves by answering questions, the value to the discussions was almost nill. Thus,the question ... what is changing my mind? The answer is their groups (and groups search / updates). My contacts, although great people, were generally folks whose work and "personal stories / research" I already knew. LinkedIn was not helping advance my knowledge.

While this observation almost sounds trite, and too obvious. If you are involved in benchmarking and researching new ideas, the groups search capability now allows one to explore domains and people outside of your own contacts. It is exactly that need which one needs filled ... to get outside of what and whom you know ... to move forward.

At present I have about 250 contacts. By using the new weekly update email, I find it valuable to see what groups my network of contacts is linking to. As an example, I recently found the Web 2.0 and Mapping Social Network group. Some research revealed that this group (many similar titled groups exist) actually has an active membership that wants to exchange knowledge. Although I don't work in Silicon Valley, via the groups web site I am able to participate in their meet-ups and watch some of the quick demos of new ideas.

As always, you get what you put into any organization, but I am now able to find new groups with which to exchange ideas. I always scan the membership up front, checking the kinds of companies and job titles from which the membership is taken.

As you watch McCain or Obama speak, do you ever wish you could have your own personal teleprompter for creating eLearning modules? If the answer to that question is "yes", and it should be (having a good script enhances your content). The question arises how can you effectively read your script, look at your animations, and create your modules?  ... by using CuePrompter.Com (no charge). In fact, if you're smart, you read in your script, and then add in your animations later. The process is easy. Just link to CuePrompter, and paste any text into the window ... select some options, and voila! (my thanks to the SnagIt blog for letting me know about this tool)

Give it a try. For your convenience, here are the beginning verses from Alice in Wonderland:

I won't bore you with the details, but while cross-training for the Outer Banks Marathon today on my bicycle, I experienced some dramatic equipment failure. The end result is I went flying with no time to react and hit my head hard on the asphalt pavement. As I type this, I have a mild concussion, a sore body and a headache. I'm okay, but my helmet is history. Take a look ... click upon the image to view at full size. You'll understand why a helmet is important. The crack goes all the way through the helmet.
. 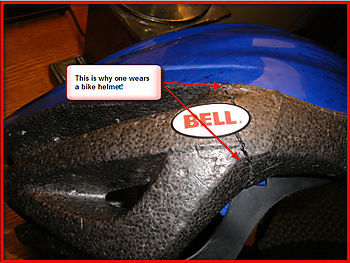 Happy Birthday to Google. They are ten years old in my 52nd year. Who would have dreamed how the web and Google would affect our lives? In honor of their birthday, Google has created a web site which reverts you to the year 2001 ... A Googler's Odyssey:

Have some fun. Google has used the Internet Archive versions to make this service. For your fun, I've compared the Beatles. The 2001 web was pretty basic, and required the user to make some choices. Today's site uses Flash, music and animation ... pretty cool. Click to expand any image to full size.