Tales from the Ubuntu

This almost sounds like "Tales from the Crypt". However, in this instance ... Ubuntu does not represent the dead. Instead it was my four year old Dell desktop Dimension 8110. This system was never speedy to begin with. Here are its specs:

This system was almost dead in the water under Windows XP and four year's of Hoeg Household software bloat. I was wondering if I should purchase a Netbook to provide another computer that would be around our house and available for basic computing and web browsing. However, before making that purchase I decided:

My initial thoughts include:

My only bummer ... can't get TIVO desktop to run (open source options don't synch the sound and video properly) and the Wine emulator doesn't work in this instance (can view Powerpoint presentations, however)

These are just some quick notes. Here are some screenshots I took with Ubuntu's screenshot tool. The nice think about this LINUX based installation ... did not cost me a cent. Click to maxminze any image.

I like to keep my blog private from my professional life, but sometimes you just have to brag! My employer, Honeywell, manufacturers APU's (auxiliary power units) for commercial jet aircraft. In the case of the dramatic controlled landing by US Airways Flight 529 on the Hudson River, this is what the Wall Street Journal had to say ...
.
Backup System Helped Pilot Control Jet

"The generators that routinely provide electricity weren't available because they are driven by the aircraft's engines -- which weren't putting out sufficient power after apparently having ingested several geese. But the plane's auxiliary power unit -- made by Honeywell International nc. -- was operating during the descent and gave the pilot full use of the jet's flight-control system, according to a spokesman for the National Transportation Safety Board and other people familiar with the details.

Crash investigations determined that a so-called ram air turbine -- which can be used to regain hydraulic pressure when both engines stop working -- also was deployed before the touchdown, board spokesman Peter Knudson said Monday. It isn't clear whether the crew deployed the turbine, or whether it deployed automatically because of the emergency. The device consists of a small propeller that drops out of the bottom of the craft, and then drives a hydraulic pump and also supplies backup electricity at certain speeds to help operate the plane's flight controls."

Now back to my comments ... if the pilot had not been able to control the A320 jet (i.e. the flight controls), it would have been impossible to fly the aircraft.

Baby It's Cold Out There!

I wanted to go cross-country skiing tonight (park with 7.5k of lit trails near by), but I'm getting soft. The temperature is already down to -12F (-24C) and although I've skied when it's colder ... I just could not get psyched up. (update: -20F at 5 am the next morning)

Ever wonder what it looks like up here in the Northland when it gets real cold? (actually colder than -12F). I invite you to enjoy a visit to a blog I discovered from the "other side" of Lake Superior near WaWa, Ontario: Mortimer on Lake Superior at Michipicoten. Some of you may remember that the Northstar Nerd's home town is Duluth, which is on the western end of Lake Superior ... and the location of my new building lot. Anyhow ... link to Mortimer's blog and enjoy:

Here is a map and one sample photograph (click to view full sized).
.

Design News has a new free webinar available, A Mechatronic Marvel ... The Digital Camera. Even if you don't care about digital photography, this excellent short seminar taught by two professors from Marquette University does a good job of explaining Mechatronics (Drs. Kevin Craig and Mark Nagurka). Although the seminar first requires one to register ... feel free to input dummy data. eMail verification is not required. I have added this seminar to the Engineering Learning Wiki and its specialized Google Custom Search Engine (Mechanical Engineering Section | Search Seminars). I've provided two screen shots from the seminar ... one shows the user interface. Click to view full sized.
. 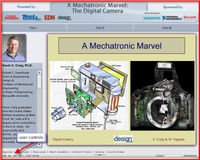 How to Muffle an Aircraft!

Actually Cambridge University calls the seminar The Silent Aircraft Initiative. Even if you're not an Aerospace engineer you may learn some useful aspects of mechanical design. This seminar has been added to my engineering seminar search engine.
. 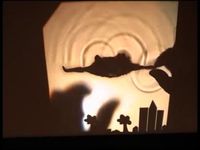