I was skeptical when I joined Yammer at work, but I was wrong BIG time. I felt the constant updates from my peers would be a distraction. Instead, I learned the power inherent in a network of technologists with similar interests. Via Yammer, folks who I did NOT know would join the same groups ... or by reputation follow me. The end result was my knowledge has been, and is continuing to be extended. This has benefited both me, and the job of perform on a daily basis.

Thus, I am forced to address the question of Twitter. Will a similar Web 2.0 service from outside my company provide equal value? After all, I don't have my company's pre-defined network. Remembering a presentation by Guy Kawasaki that I attended in the early days of the internet many, many years ago ... he said with respect to eCommerce and eBay: "If you have never sold something upon eBay, you can never understand it!" I took that advice to heart and went home ... signed up for eBay ... and within a week sold to large lots of accordion sheet music for almost $100. I was amazed.

Therefore I have decided to give Twitter a test. The service gives the advice to "not overly think your micro-blogs". I ask, is the world ready for the Northstar Nerd as he posts about testing wax for the Mora Vasaloppet 42k Classic tomorrow (I think purple)!

Once the decision was made to join Twitter, the next question I had to address ... how should I define my network? I decided to use my LinkedIn contacts ... I followed the Twitter instructions and exported my 275 contacts. After an analysis I discovered 40 of my LinkedIn contacts are on Twitter. They became the basis for my initial network.

I will be happy to add anyone who reads this post to my "Followers" ... or you can just follow me:

Here is a screenshot from my first activity ... I noticed while typing this post I've risen from 2 to 5 followers (yippee ... I guess?!). Click upon the image to view full sized. 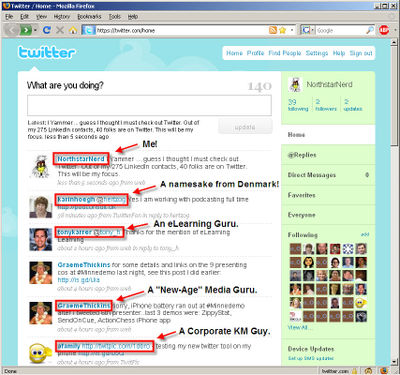 Yes, it's true: a little-known benefit... Twitter can keep you young!

Also saw funny video about an unauthorized commercial for Trader Joe's, which doesn't advertise. It made me laugh, and I shopped today at TJs (so it had some commercial value.)

Also you'd be surprised at how many Hollywood and Broadway types tweet. And they are not all young. Bill Shatner tweets. Many actors who are involved in web productions, such as Felicia Day and Brea Grant, tweet, as do some Broadway types.

And like many people, I maintain two twitter accounts. One is for the public, the other is private and limited to just a few select family and friends. Kinda like Obama's Blackberry.