Lake Superior did not provide her air conditioning today at Grandma's Marathon. Instead the wind blew from the West and the heat rose to dangerous temperatures (87 degrees at the finish). I hope you enjoy the short video; you'll learn what it's like to run a "black flag marathon". The Northstar Nerd ran a personal worst by almost 50 minutes (5 hours 17 minutes), but I finished. Next Winter, I promise I will never again complain when cross-country ski racing in a sub-zero Loppet! The cold will feel heavenly!

Follow this link for a higher res version of my video. Most photos were taken by my family, but some are from the Minneapolis Star Tribune and Duluth News Tribune.

Finally, view my 2010 Grandma's Marathon Man Cam Photos. The weather was much nicer (i.e. cooler), and I improved on my 2009 result by one hour!

Paraphrased from the Duluth News Tribune:

The medical director, Steve Harrington, almost shut down the race down while it was in progress: "Race protocol calls for the medical director to confer with executive director Scott Keenan on matters of an unsafe race. They discussed the option of stopping the marathon and having runners brought in off the course by bus, and Harrington said it very nearly happened."

There were 577 runners treated at the finish-line medical tent. Most were treated for hyponatremia (low sodium) and hyperthermia (heat stroke), with one runner showing a temperature of 108 degrees.

Gold Cross Ambulance had 83 calls with 53 transports, including 36 to Duluth hospitals, the most in Harrington’s time with the marathon.

Innovation is not just nice; it's a requirement. Take a look at the chart below which is a prime reason the newspaper industry has tanked. Throwing up walls around your products will ultimately not work; one must take risks and move forward. My thanks to Graeme Thickins for the Tweet about the Business Insider "Chart of the Day". Click upon the chart to view full sized / resolution. It will allow you to read all the data points and explanations.

Last Fall my daughter Karen married a great young man, Matt. She decided to follow the family tradition of visiting the local DQ for ice cream between the wedding and reception ... just like her parents had 25+ years earlier (i.e. Molly and me). Apparently someone in the Dairy Queen marketing department got wind of Karen and Matt's trip to the DQ ... and they posted (with the family's permission) a story and photos of each generations trip to the DQ. After all, there are no problems in life that ice cream can not solve!

I may be biased, but this is a good use of social media by a company! The Facebook post appears to be much more active. Here are the two couples ... like Mother and Father ... like Daughter and Son-in-Law!: 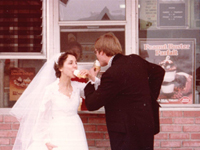 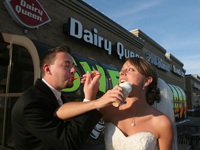 Collaboration in the Cloud (ROI)

Sometimes it's hard to believe how new all the various Web 2.0 tools which we now take for granted really are. Over the past several months I've worked hard at finding formal academic research which attempts to demonstrate the business value / ROI of social media for non consumer focused industrial companies. Well folks, it's slim pickings out there! While I believe in the value of social media and have many examples where the enhanced communication has delivered value, this field seems to be too young to have attracted many formal academic studies. In addition to my own efforts, I've had two research librarians look hard for content. While it's easy to find articles in magazines and journals authored by so called experts, thorough studies using metrics are almost impossible to find.

Here is what I've found. If you know of other sources, please post a link in the comments.

From the University of Southern California, I found an excellent report on the ROI of virtual teaming (Meeting the Performance Challenge: Calculating ROI for Virtual Teams). This 47 page report studies two teams in detail including a global alliance research and development team. Here a quote I particularly like:

"Creativity/Innovation: The team clearly benefited from greater cross-functional representation enabled by the ability to tap members from geographically dispersed locations. The remote members also were able to bring in perspectives on the marketplace that were not immediately apparent to the team members residing at headquarters, away from the population centers on the two coasts of the country. These team members from different functional and marketplace perspectives engaged in a dialogue that stimulated creativity in their scenarios"

And my other favorite quote from the study:

"Technology: If managed properly, working virtually can encourage greater and more effective use of technology. The fact that members have to use technology to communicate pushes them to consider using technology in ways that might otherwise be ignored by team members who have little to no spare time for learning new systems"

I actually posted via Twitter in my attempt to solicit benchmarking partners. Here are links to a couple of those Tweets (I found even less academic research surrounding industrial use (non consumer focused) of Twitter and micro-blogging):

I did come across one other intriguing academic research effort led by Professor Sandy Pentland of MIT. He is the recent author of a book, "Honest Signals ... How They Shape Our World" (podcast). The professor and his team are doing some cool research on social networks and cell phones. The research participants wear a sensor device which delivers data to the research team. Unfortunately, the data around social interaction with cell phones while interesting, does not really pertain to my corporate work.

For those of you with access to APQC, they also have a very thorough benchmarking report (200+ pages) on "Accelerating Collaboration and Knowledge". However, formal studies of micro-blogging (Twitter, Yammer, etc) in which I have a particular interest are rare.

Once again, if you know of examples, or work for a large industrial company and would like to benchmark, post a comment or give me a shout. 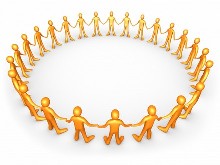 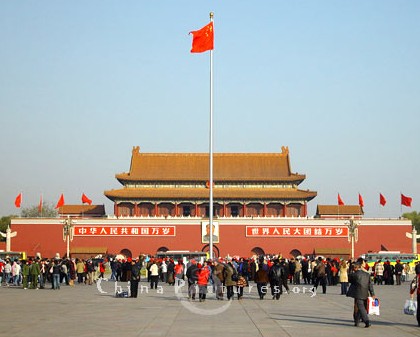