The Fall of the Wall ... A Cold War Kid's Perspective

How the world has changed ... for the better! 20 years ago the Berlin Wall came down. My personal travels have taken me many times for both business and pleasure to the Czech Republic (Pavla's wedding) and China (trip to JiaYou: Link #1, Link #2, Link #3). Both of these countries were on America's "persona non gratis" list when I was younger. Here are some of my Memories from an earlier age:

Now through work I lead collaboration projects for a large Fortune 100 company which involves working almost daily with friends / co-workers from China and the Czech Republic. Pavla, whose wedding photo is displayed below is my "Czech daughter", and via Skype and Penny Talk I am in constant communication with her. Her "real" father died young due to his opposition to communist rule in Czechoslovakia, but that's another story ...


My son is now studying in Europe for his master's degree through Johns Hopkins University. Like his Dad, he blogs ... and has an interesting perspective on the historical significance of today (see his blog post). He comments upon a world he never knew ... thankfully.

Click to expand either image ... from our travels to the Czech Republic and China. 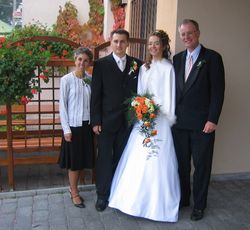