25 Years of Technology and Culture

When I return to work on Monday after my holiday vacation, I will have completed 25 years at Honeywell. This achievement is rare in today's corporate world. As I tackle new challenges and technologies in my work career, you'll pardon my taking a few moments to look back over the past quarter century. However, to avoid a boring pontification let's link this review to Google's resource that let's one review images from that time long ago ... Life Through the Eyes of Google.

Thus, just prior to starting my new job, here is the a cover from Time Magazine in 1984 ... Bill Gates and MS-DOS (click to expand any cover image for full sized viewing). 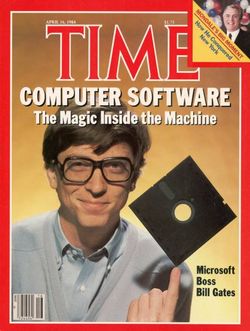 I was hired to start an IBM compatible PC computer training program. As I learned all about DOS and the magical keystroke of Lotus 123, it would be almost two years before we actually had IBM compatible PC's. Instead, my first computer at work was an Apple II+ with 64k of RAM. My present laptop has 4 gb or 62,500 times more active memory!

Our computer classes were extremely popular with employees. We kept our training rooms busy days, nights and weekends. About the only time I could never successfully fill a class was on Friday and Saturday nights!

Early on I discovered that some of my best software instructors were former elementary school teachers! What does that say about we adults! Time for recess and then a nap!

Some of the other radical changes I've experience are working with the computers themselves. When I first installed 5 meg hard drives in our classroom computers, I had to write assembly code to insure the systems could address the huge amounts of storage! This past Summer my youngest son, Erik, purchased a new external hard drive for his computer ... $100 for a terabyte! My other constant concern were bent or broken pins. If one was careless while doing a RAM or CPU upgrade, it was easy to wreck expensive components. I love USB! 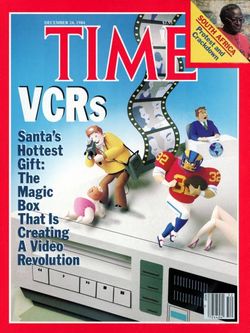 However, all work and no play makes for a boring life. My wife and I were able to watch our favorite program, Dallas, by virtue of the newfangled invention, the VCR. It was a huge decision at the time to make the purchase. Prior to Honeywell, we were both working at RCA (remember Nipper?) and worried whether we could afford this major purchase. Our new VCR cost around $450, and we were allowed to use an interest free payroll deduction to make our payments.

Little did we know the VCR was just the start of a tidal wave of changes. Today, our family has hand held computers (iTouch's, iPods, GPS navigation systems and Nokia's), time shifts using TIVO (out with commercials), satellite radio and our own home network.

This leads me to the important question ... who did shoot JR? I'm certain it must have been one of the Housewives of New Jersey! Reality TV was way off in the future. I will even admit to having watched the first season of Survivor, and hosting a party with Survivor themed food for the final episode.

I really can't imagine what entertainment will be like in another 25 years. However, Moore's Law will definitely still come into play. On a whimsical note, I also took my daughter bar hopping for the first time on a cold December night 25 years ago. You see, this young couple was driving back to Minnesota and our new jobs. In the middle of the Upper Peninsula, my six month old daughter needed some milk. Anyhow, I figure most bars had the new cooking device ... the microwave. It would warm Karen's milk in seconds.

.
Thus, I entered Hoppy's Bar ... sauntered up to the barkeep in front of some old northwoods guys who were pounding down a holiday beer and asked to warm my bottle of milk! Gotta love technology (sorry Karen ... now happily married to Matt and expecting their first child ... she has heard "Dad" tell the story of Hoppy's Bar many time over the years!) 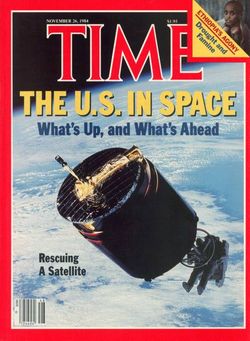 One field which unfortunately has not seen much change is our nation's pursuit of R&D and Space Technology. The Space Shuttle represents old knowledge. I am constantly amazed with what NASA accomplishes with old systems and computers. The robotic exploration of MARS over the past few years was remarkable, as was the daily reprogramming of robots using small bits of code from millions of miles away.

Now many people might exclaim that America can not afford a space program given our tight economic situation? I would contend that we can not afford to be without a strong an inspiring NASA. As a young boy, I was fascinated by Mercury, Gemini and Apollo. Those astronauts are in some ways directly responsbile for my love of science and technology. If we as a society lose the love to learn and move forward ... if kids decide math and science are not cool and thus avoid those subjects in school, we all will be worse off in the future. I've tried to do "my part" by coaching First Lego League for six years, and building my Kids Corner of my Engineering Learning section of NorthstarNerd.org.

As I type this blog post, hanging over my desk is a framed, autographed photo of the second Space Shuttle flight. Thanks guys ... Joe Engle and Richard Truly.

In closing, I'll move away from 1984 Time Magazine covers, and focus upon a different issue which is near and dear to NorthstarNerd.Org. As you may have noticed, the tag line of this site states that NorthtarNerd.Org is "dedicated to open access sharing of knowledge". My 25 years with Honeywell started with the new year back in 1985. At the time, there were all kinds of reflection in the media on whether life and society at that time mimicked Orwell's book. Knowledge needs to be free! This does not mean that companies do not have a right to make profits from application of that knowledge, but if we restrict the flow of information, we all are poorer.

Thus, as of yesterday (January 1, 2010), I invite you to review what should have entered the public domain yesterday ... note how I said should: 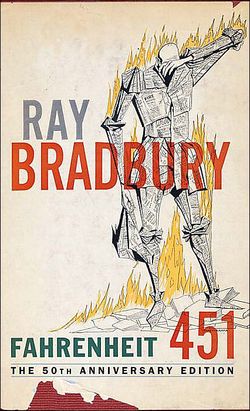 I'm looking forward to my years ahead. As always I will continue to learn, and in that learning become a smarter person. Without learning, there is nothing.

It's traditional at award banquets to thank those most important for one's achievements. It may seem trite but ... thanks Mom and Dad. They taught me to learn and be curious.They both realized that the best present they could give their children was the gift of education. Molly and I have tried to follow their example with our own three children. In fact ... just a few moments ago Carl (my middle boy) emailed me from Bologna. He just arrived back to continue his masters studies in Italy after spending the Christmas Holidays at home. Sometime later today we will have to talk by Skype. It's now time to move forward, and not reflect about the past!