I've posted photographs from my GoPro Head Cam. If you would like to see the 2010 American Birkebeiner 54 kilometer classic race from a participant's view, either view the slideshow shown below or link to my Picasa web album for higher quality viewing and free download options: (see more Northstar Nerd Ski Cam Man Photos)

And I made it up Bitch Hill (see below ... click to view full sized) where 1/2 the way up the hill a priest with a microphone shouted: "Sinners, you are forgiven for your blasphemes shouted out loud as you climb Bitch Hill!". You'll find more Bitch Hill photos via my Picasa Web Album link. You should also link to Scott Brown's GoPro Camera Videos (unlike my still shots).

Curious how much elevation you gain climbing Bitch Hill and all the other Birkie Hills? Link to my post which gives Garmin data for many of the major ski races in this region.

Innovation Outside the Ski Tracks

Innovation. It's something all businesses want, but often few find. This post is about perceived engineering innovation. Why perceived? The answer rests with the performance of my new skis in the American Birkebeiner Cross-Country Ski Race (54 km / 34 miles). I'll report back after the race, but even you non skiers should be interested in this "evolving story" of Madshus Skis and the Northstar Nerd. Let me define the scenario, and how Madshus has expanded the marketplace with what I perceive as an innovation in the design of waxless classic cross-country skis.

The Concern: The combination of rising temperatures through many wax ranges (Green, Blue, Purple, etc.) and pine needles when coupled with a long distance race makes waxing for this citizen racer very difficult, if not impossible. However, I've been skiing on classic skis and waxing to meet the snow / weather conditions since the late 1960's. I know how to wax, and have "nailed" every waxing job for the four other races in which I've competed this Winter.

The Ego: Many skiers, including myself have always looked down upon waxless skies. Performance over the years has generally been worse than a good waxable ski.

The Decision: Due to a bad waxing experience out on the Birkie Trail during the Birkie Tour, I did some online research and discovered Madshus Terrasonic Zero Waxless Ski. I already knew about Madshus Skis, but not this product. Their waxless ski bottom design incorporates materials on a base where one uses sandpaper to adjust the ski's kick zone! The days of "fishscale" noisy waxless skis are over. (read Madshus waxless skis bottom preparation instructions).

My Pre-Birkie Test: Although I had pretty much decided to go with my new Madshus skis, I still had a nagging concern that it was the wrong decision. Thus, this afternoon I conducted a time trial ... Hoeg vs Hoeg! I drove over to the local ski trails and did a 1.5 km test ski at full speed on both my Atomic Pro Race Classic and Madshus Terrasonic Skis. I skied my Atomic skis first, and measured the results with my Garmin. The difference between the two tests was one second. (test conditions: sunny, 18F and icy older snow)

A Bit More Data: I've skied Atomic Skis for a long time. Thus, Madshus has not only convinced me to try a waxless ski, but to also change brands. For athletes, that is often a big deal.

This ENDS Part #1: I spent $250 to purchase my new skis with bindings (normally more expensive, but I benefited with end of Winter sales). I'll report back after the Birkie and let folks know whether I believe Madshus has achieved innovation ... only 54 kilometers to go!

I also have contacted Madshus. Let's see if I can bring them into this dialogue.

Update on Friday, Feb. 26th: Although I like my new Madshus Skis, I'm wavering in my resolve at the forecast looks colder at the start than expected. I hope to finish in around 4+ hours. I start at 8:40 a.m.

Post Birkie Update: I did use my Atomic ProRace Classis waxable skis for the Birkie. I was concerned that the conditions were too cold for my Madshus skis at the start. At around 44km, I did stop and add purple wax, which was a smart move given how much it warmed up through the morning.

However, I have been very pleased with the performance of my Madshus Terrasonic skis at 25+F. 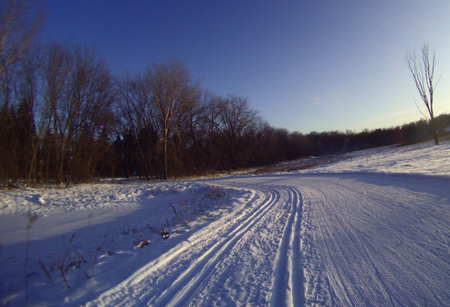 T -5 days and counting to the American Birkebeiner. The Northstar Nerd is ready to race 54 kilometers through the wilds of Wisconsin. I'll update this post with my ski cam photos after the Birkie. You'll have the unique opportunity to see this cross-country ski race from the eyes (and head cam) of a competitor. If you would like a preamble / taste of what this kind of cross-country ski race is like, I invite you to experience some ski events from earlier this Winter: 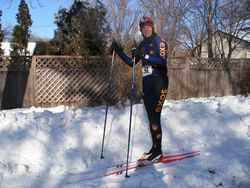 My head cam photos are now online ... Ski Cam man returns for the Mora Vasaloppet. Follow this link for a slideshow, or enjoy my fall (see below and click to view full sized): (see yesterday's post for Garmin ski trail difficulty measurements ... including the Vasaloppet)

And my falls ... captured by my head cam: 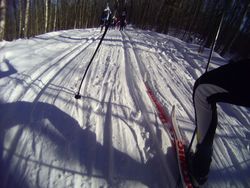 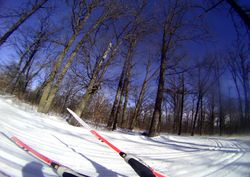 As some of you know, I've been using a Garmin and Sporttracks software this Winter to measure my cross-country ski trail workouts (see my tutorial). As I get ready for tomorrow's Mora Vasaloppet, if you only concern yourself with the distance of your workouts, you're missing the boat (or the trail ... in this instance!). Here is some intriguing data of different workouts from my Garmin . The measurement is feet climbed per kilometer (i.e. I took the entire ski and divided the total elevation climbed in feet by the distance travelled). The trails are listed in alphabetical and terms of difficulty. Finally, as I tend to focus on classic (not skating) my routes generally branch off onto the "classic only" trails.

See Head Cam photographs of the American Birkebeiner and the other races.

Note: For events with two data points, the second image will have the elevation measurements.

And some City of the Lakes Loppet Garmin data (click to maximize view). Please note the distance! Apparently I shaved off some distance on some curves! (see my Garmin and SportTracks tutorial)