At least when it comes to picking new locations to live ... during 2008 persons from northern Minnesota never moved any father east than Wisconsin, but southern California was still a draw! Expand the image given below to see the details. My wife and I are both originally from Northern Minnesota, and are building a new home in Duluth. Thus, we found the migration patterns intriguing!

Are you curious to see outward and inward migration for any county in the United States? There is a fascinating article and interactive map hosted by Forbes.Com. It allows the user to point to any county and then activate the migration patterns from 2008. (I learned about this Forbes service via the Map Scroll Blog) 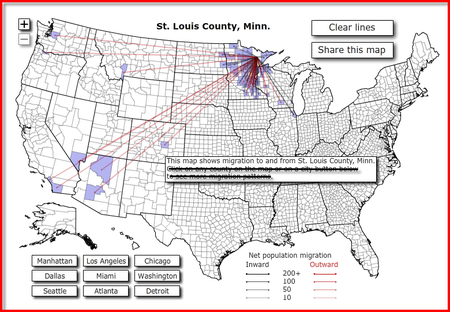