The Nerd Throughout History

This is a repeat post, and is NOT original research on my part. Last week I published a link to the history of the nerd. A peer of mine while connected at work followed my link, and was blocked due to the site's less than admirable rating. Quite frankly I don't understand the rating; Bron's site is respectable, if perhaps off beat. However, if the world was always wrapped in a plain brown paper bag, life would be boring. Thus, I give you the "History of the Nerd ... Part 2"!

I am not an object oriented programmer, but if I was I would take Stanford's free course on how to develop apps for the Apple iPad / iTouch / iPhone environment. Given the huge uptake on this technology, I did watch the 1st session of the Stanford course which gives a techie like me an understanding of the Apple iOS. Starting at 16:41 of the first lecture, the course gives a quick overview of how Apple's development system is constructed. This course is just one example of iTunesU!

However, if Apple is not your cup of tea (or fruit), then spend some time reviewing Google's long list of software engineering research. You may read / download the abstracts or the full papers. As with the Apple course, I've added this content to my Software Engineering Section and Manuals Section of the Engineering Learning Portal.

As many of you know, last Winter I wore a GoPro wide angle digital camera when I competed in several of the regions cross-country ski loppets, including the Mora Varaloppet, the City of the Lakes Loppet and the American Birkebeiner. It was a great experience becoming SkiCam Man, and like a bad dream ... he's back!

Yesterday I had a great 17km classic ski at SnowFlake Nordic in Duluth, Minnesota. In addition to enjoying some great early season snow conditions, I wanted to test some new firmware which I had downloaded to my camera. The update from GoPro claimed it would help with resolution in Winter (i.e. snow) conditions, and also allow me to take automatic pictures every 30 or 60 seconds (had been able to take automatic timed photos up to a 5 second interval). The new timings worked great, but I didn't notice much change of photo results. I've found that the camera does well in Winter sunny conditions, but not as good when it's cloudy. Yesterday I experienced both clouds and sun during my workout. You be the judge; I've embedded a sampling of yesterday's photos in the slide show given below. You can also link to my Picasa Web Albums and download any photo w/o charge (see SnowFlake Test folder).

After my ski, I had a great time talking with George Hovlund, owner of SnowFlake and former Olympian. He was intrigued with my camera! I explained to George that this year I was trying a reversed chest mount for my camera (i.e. worn on my back ... taking photos of where I've just skied ... I like this approach as I now take pictures of skiers faces, and you don't tend to see my arms and poles in the photos).

Finally, just to show the true ski nerd I am ... not only do I wear a camera, but I measure my workouts via Garmin and SportTracks. Click to maximize the image shown below. 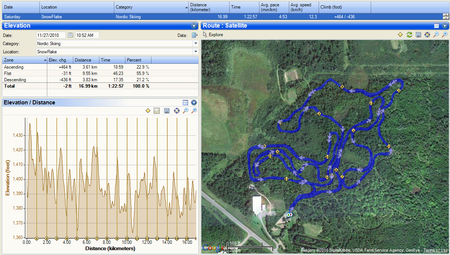 Happy Thanksgiving from the Northstar Nerd. I hope you enjoy these three photos showing the frozen Northland!

I hope you and yours have a blessed Thanksgiving. We have a lot for which to be thankful. The second major snow of the season starts in a few hours, just in time for Thanksgiving. This year has been unusual for the great early season cross-country ski conditions. This morning I skied 17 km at SnowFlake Nordic Center just outside of Duluth, Minnesota (thanks, George Hovlund).

When I ski, in the true NorthstarNerd tradition, I tend to be a bit techie! I often record my races (see SkiCam man photos), or use my Garmin to measure and compute a trail's difficult rating. As a serious competitor, a skier needs to know more than just distance. Thus, I measure the total elevation change divided by the distance traveled.

The conditions this morning were fantastic for classic. SnowFlakes difficult rating is 20.29. As a frame of comparison, the Birkie Trail has a rating of 59.44, and the Mora Vasaloppet has a rating of 30.67. Having noted that, SnowFlake is worth a visit! However, the hills are mild.

You can view all my other ratings via this page. You may also be interested in my MinnSki Portal (Nordic Skiing in Minnesota)

Finally, click upon the image given below to view the Garmin data for my SnowFlake workout. 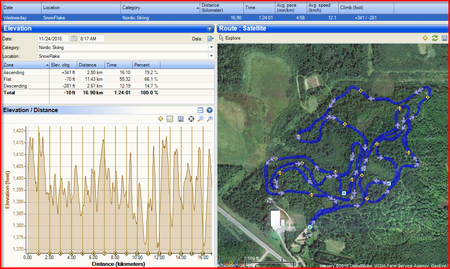