Hopefully if you've read NorthstarNerd posts for more than a few months, you understand that I like to take the "road less travelled". After all, it is only by branching out from the normal and common in life that one learns. This is true when it comes to web research and development, but it is also true in terms of ones physical movement from point A to point B in the physical realm.

Over the Memorial Day weekend, I needed to help my youngest son who was starting an engineering internship get established in a new apartment. This required my wife and I to drive 300 miles to Oshkosh, Wisconsin. Our trip down to Oshkosh was uneventful. However, I decided to try a new route home via US Highway #10. I knew this meant less miles on Interstate #94, and more time spent driving a two lane highway through rural central Wisconsin. Here was my reward ...

While most people were fighting the Memorial Day traffic on the high speed interstate highways, it was unusual when I saw more than one car in my line of sight. Most of the time, it was just our car and the surrounding farmland and forest. Every 15 to 20 miles we did have to slow down and drive through small town America ... and then ... staring us in the face we saw it! The Wisconsin Pavilion from the 1964 New York World's Fair. Yes, this architectural wonder had somehow worked its way after the fair closed in 1965 back to rural Wisconsin. I had found the Big Cheese!

Seriously, US #10 was beautiful and held unexpected rewards ... from the Pavilion to beautiful farms. Do you ever take the road less travelled?

In closing here is some data about the 1964 New York World's Fair Wisconsin Pavilion (click upon the image to view full sized): 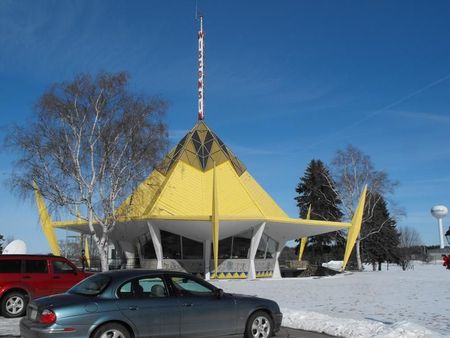