This afternoon I learned how difficult it is to photograph a steam engine when it crosses a bridge in the northern forest. Given it was a beautiful afternoon, I decided why not head up the north shore of Lake Superior and try to photograph the Soo Line steam engine from the North Shore Scenic Railroad as it crossed French River?

In theory this task should have been easy. I descended into the ravine, chose my rock and waited. Right away I realized achieving my goal would be difficult. Recent heavy rains had swollen the river, and the rapids were roaring. Although I would normally never refer to rapids as "noise", in this case I would have little or no warning of the approaching steam engine.

The afternoon light was perfect, but what I really needed was an assistant 200 yards up the rail line who could phone me and tell me to start taking pictures in autoshoot mode. Oops, this would assume one could get a cell phone connection in a ravine in northern Minnesota. Oh well ... I waited for over 40 minutes on my rock and planned "my shoot". Many times I turned my camera on and pressed my shutter release. False alarm, the rapids had fooled me again.

In the end I had about 1 to 2 seconds warning, and started shooting. The slideshow given below has seven photos. In the end I climbed out of my ravine laughing at myself. This business of photography is harder than I thought! (direct Picasa link to view high res photos). You'll also see I played around with the photo effect settings. 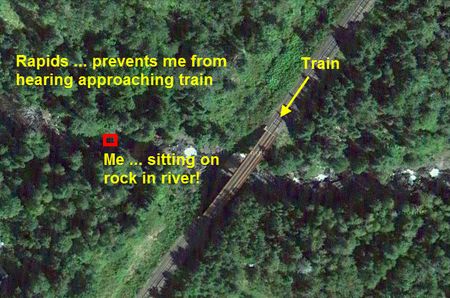