« Living in the Future! | Main | Elegant but Simple User Design »

Summer in the BWCA

One of the more foolish decisions in my life was starting my work career two days after my college graduation from Dartmouth. While I was learning the world of work, two of my friends during the Summer of 1978 bought an old car, and tripped across the USA.

Late last Winter, my middle son Carl phoned me from his graduate studies at Johns Hopkins. His question was simple: What did I think about spending his last Summer before graduation in the Boundary Waters Canoe Area (BWCA) working for Tuscoroa Outfitters instead of staying in the Washington DC area and working in a job relevant internship? It was an easy response, even with all the focus on optimizing one's resume in this poor economy, I said "go for it!". Visions of the missed car trip across the USA during the Summer of 1978 made me determined to not see my son make the same mistake. Work will ALWAYS be waiting. Life experiences will not!

Last Wednesday I picked up Carl from his job at the end of the Gunflint Trail. His Spring and Summer were everything I had hoped it would be. Communications had been difficult with Carl as the BWCA is "off the grid". Just like his Dad, Carl blogs. Whenever Carl had a connection, he would post about his time "up north".

Early in Carl's Summer he took one canoe trip where he camped on an island in Crooked Lake. After the trip he sent us photos, and a description. I immediately pinged him back ... for you see, it was on this very same lake and island campground during a canoe trip with my wife almost 26 years ago that Molly first told me she was pregnant. Guess which of my three children would soon enter this world? Carl! (read Carl's post about this trip)

Here are links to the Summer canoe trips:

And perhaps my favorite post in the realm of father knows best! Black Flies! If you've ever spent time in the wilderness during a black fly hatch, you'll understand my love of mosquito netting head gear. Carl thought I was crazy. He learned otherwise!

Finally, here are two photos of Crooked Lake with a link to the specific trip. Click to maximize either photo. 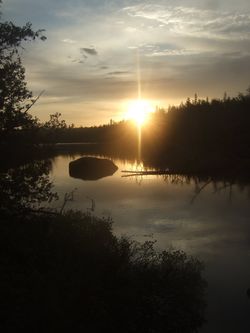 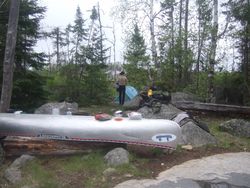 Posted at 06:58 AM in Northern Life | Permalink