« Sit Next to the NorthstarNerd on your next KLM Flight! | Main | Elm Creek Park Nordic Ski Photos »

I work for a large Fortune 100 firm, and my job involves collaborating with people from all over the world. Over the past few months, a number of us from the USA had remarked in casual conversation how colleagues from India often used the English phrase: "Do the needful". While we understood the request, this particular phrase was not common to our own local use of the English language.

This morning I finally decided to ask "the Google", and I discovered I really like the phrase and its implication of respect and trust. Here an excerpt from the the Wikipedia article:

"Do the needful" is an archaic expression which means "do that which is necessary", with the respectful implication that the other party is trusted to understand what needs doing without being given detailed instruction.

I enjoy learning from my global peers! What experiences have you had? 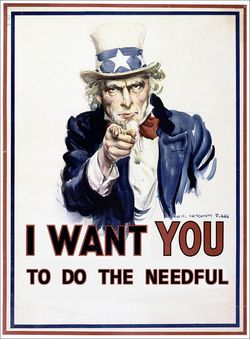 I didn't know that Rich, and we were wondering where the expression came from. It's rather adorable and I wish we had kept it for modern English.