Sometimes it takes a while for me to learn something, but when I do ... whamo, I am all over it! That is the case with Angry Nerds. This past April 1st, Atlassian created the perfect April Fools joke, Angry Nerds. However, the response was so great, you can actually "play" the iPad / Android game (no fooling). When you link to Angry Nerds, make certain you click upon the nerds in the game viewer!

Finally, I had to create my own Angry Nerds ... circa the Northstar Nerd (see below)! 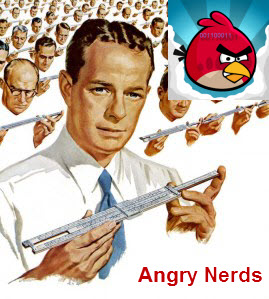 The Northstar Nerd is two months shy of his 56th birthday. How neat would it be in 40 years to be as cool as Uber Geek, Bill Sleeper? This guy is amazing! Here are a few excerpts from an interview conducted by Geek Wire:

“Can I give you a demo?” (asks Bill Sleeper)

It’s not unusual to hear those words inside the offices of a technology company, but this is the Merrill Gardens retirement community in Mill Creek, north of Seattle. The man with the cool gizmo is Bill Sleeper, 96, the resident technology guru. And the subject of his demo is a Laser Stage Lighting device on his kitchen counter. Sleeper hits the switch and soon the ceiling of apartment is filled with a sea of colorful dancing dots.

“At night, this blows you away!” he says.

Thus, the next times technology befuddles or confuses you, remember uber Geek. If you stop learning in your 20's, 30's ... 50's, etc, life will charge you by.

I'll return to technology focused posts next week, but for the moment ... Happy New Year! from the Northstar Nerd. Enjoy a short Nordic Ski in the Northern Minnesota Lake Superior Wilderness (Sugarbush Trails). The video was taken at the end of a 32+ kilometer ski (20 miles). I was tired and wearing a GoPro camera mounted on my head. The day was kind of dark. GoPro's do better in sunlight.

Click upon either image given below to view at full size 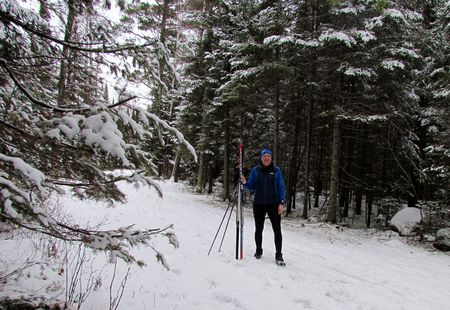 As we start 2012, here in America we owe great thanks to those individuals who fought to preserve our freedom and way of life. Two days ago, Mike Colalillo, a home town hero and Medal of Honor recipient in World War II died. Thank you, Mike.

An interview with Mike Colalillo in his own words:

Private First Class Mike Colalillo, 2d Squad, 2d Platoon, Co. C, 1st Battalion, 398th Infantry, 100th Infantry Division was pinned down with other members of his company during an attack against strong enemy positions on 7 April 1945 in the vicinity of Untergriesheim, Germany. Heavy artillery, mortar, and machine gun fire made any move hazardous when he stood up, shouted to his company to follow, and ran forward in the wake of a supporting tank, firing his machine pistol. Inspired by his example, his comrades advanced in the face of savage enemy fire. When his weapon was struck by shrapnel and rendered useless, he climbed to the deck of a friendly tank, manned an exposed machine gun on the turret of the vehicle, and, while bullets rattled around him, fired at an enemy emplacement with such devastating accuracy that he killed or wounded at least 10 hostile soldiers and destroyed their machine gun. Maintaining his extremely dangerous post as the tank forged ahead, he blasted three more positions, destroyed another machine gun emplacement and silenced all resistance in this area, killing at least three and wounding an undetermined number of riflemen as they fled. His machine gun eventually jammed; so he secured a submachine gun from the tank crew to continue his attack on foot. When our armored forces exhausted their ammunition and the order to withdraw was given, he remained behind to help a seriously wounded comrade over several hundred yards of open terrain rocked by an intense enemy artillery and mortar barrage. By his intrepidity and inspiring courage Private First Class Colalillo gave tremendous impetus to his company's attack, killed or wounded 25 of the enemy in bitter fighting, and assisted a wounded soldier in reaching the American lines at great risk to his own life. 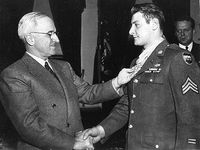