Via my son. Erik, who is finishing up his BSEE this Spring, I learn that there are a few things I do not know about Google. Try this! (insert into Google):

Here is another example, with the image! (click to maximize) 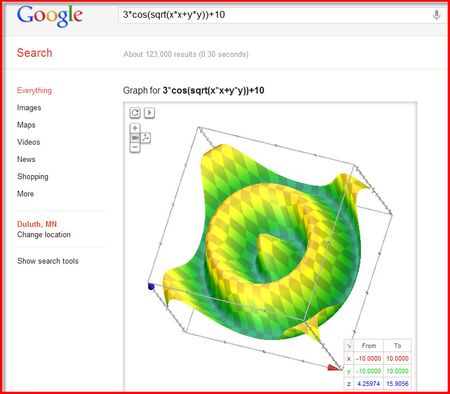 I knew there was a reason I paid thousands and thousands of dollars to allow Erik to get his engineering degree ... to keep me informed about Google's latest tricks!

I need access to a 3D printer! If you love Legos, K'Nex and Tinkertoys, then you you have a similar need. The folks at F.A.T. Lab and Sy-Lab just developed items you can print out for free via your rapid prototyping 3D printer which allows these three building / construction toys to be interconnected. How cool is that?! Here is the link to download your designs / free universal construction kit!

If you have some engineering prototype designs in the queue for your 3D printer, they can wait. This is really important!

Post Update on April 13th: I'm investigating the online 3D Printing Service named Shapeways. I uploaded some of the models, but I need to find out if the design dimensions use metric or inches.

Minimizing Your PC's Boot Up Time

Crud! The first day you bring a computer home from the store, with each software install it becomes increasing inefficient. Every utility adds its own little bit of code to your startup process, and often if you're not careful, a lot of junk. The end result is a long, slow, and sometimes painful startup / boot process.

Right now I am evaluating a free tool named Soluto. This service allows the user to add up to five computers per account, and manage the boot / startup process and browser configurations. In addition to managing your own computers, this can be a godsend in terms of helping optimize those other computers you support for families and friends. Soluto lets you manage remote computers once the software is installed and management rights granted.

Although I consider myself extremely careful in terms of what I install on my computer, and always read the fine print while installing software to avoid "junkware", Soluto still found quite a few apps I could disable or delay upon boot for my Windows 8 system. The analysis of my browser did not turn up any add-ins which needed disabling.

Here are some screenshots. Soluto is worth a try. For the services it recognizes it gives you a clear definition of the process, and the advantages / disadvantages for either disabling or delaying the specific process upon boot. This service is easy to use; you need not be a computer geek like myself!

Please realize the installation takes a while. Be patient, and then do a cold boot of your system. You will start to get good data within 5 to 10 minutes. It's worth the wait!

Click upon any image to maximize and view at full size. 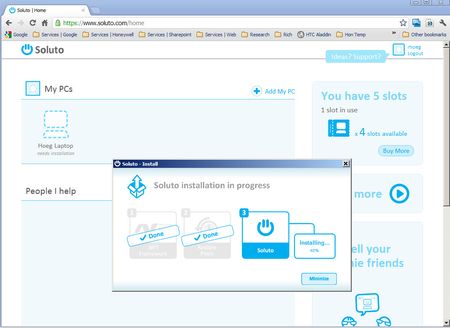 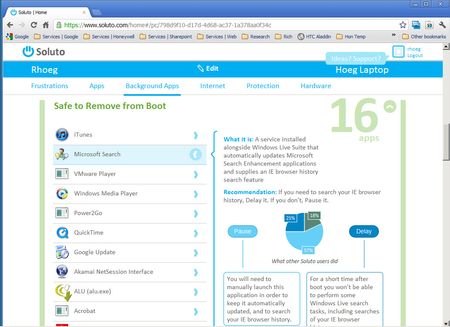 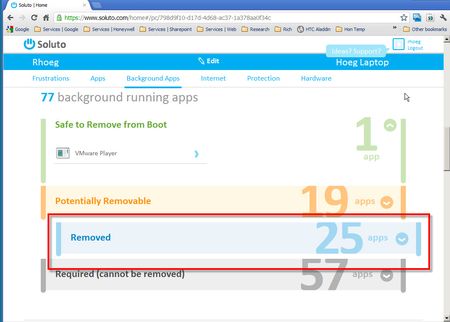 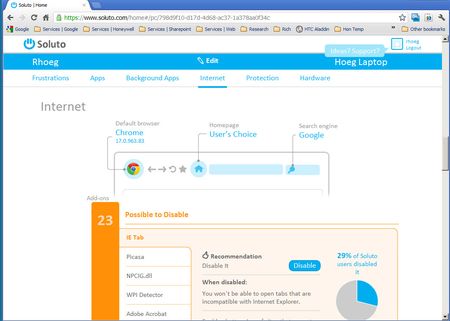 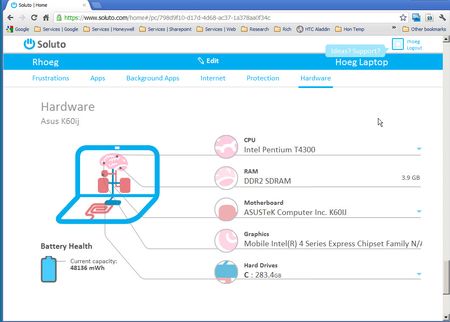 What is the common thread connecting each of these items? Extinction (past or coming soon). By now many of you have heard that after 244 years, the Encyclopedia Britannica has published its last hard copy version (WSJ news article). While I love Wikipedia, the demise of the printed book brings us closer and closer to the fictitious world of Fahrenheit 451. Although physical books are not outlawed in our society, their future is in jeopardy.

Why do libraries and Encyclopedia publishers need to adapt?

First a historical perspective is required in terms of what happens to organizations which don't change given how the world wide web affects distribution chains. How many engineers remember NTU (National Technological University). In it's time (the 1980's and early 90;s), it was a great idea. NTU's satellite network linked some of the best engineering university networks in the USA. Any NTU student could take courses and obtain a masters degree from over 30 of America's top engineering colleges. However, satellite networks as distribution systems are expensive. When the the internet first made video course distribution possible. I was serving on NTU's Executive Advisory Board. However, I led my company's charge away from NTU. Due to the cheaper distribution system provided by the web, Stanford Online gave my engineers access to Silicon Valley's finest minds for a fraction of NTU's cost. Many Stanford courses are still part of my engineering learning portal.

My second example is the newspaper industry. Newspapers in their current form will soon be dead. The combination of newsprint, printing press operations, and delivering the paper to your doorstep creates a cost structure which can not beat electrons.

Have you ever heard of the fourth estate? This quote is from a post which dates back to January 2007 on NorthStarNerd.

"In the year 2014, the New York Times has gone off line. The fourth estate's fortunes have waned. What happened to the news? And what is EPIC?" ... "Given this event, I invite you to pretend It's 2014, and GoogleZon rules media, and the net. Take a trip back in time.  It will take you on a tour of media, and the net, from it's inception in 1989, right up to present day in the year 2014!
(watch the video)

Please watch the video. It was created over 5 years ago. In addition to being entertained, you should be amazed at its accuracy. How many newspapers are now defunct? In my own case, I read daily the USA Today app via my iPad. This modern newspaper (minus the physical) delivers news integrated with multimedia. Much of that news is also personalized to the individual. You may not realize that the USA Today is the newspaper of the Northland! The key fact is my newspaper is not your newspaper. Click upon either image given below to maximize and view. I think you'll understand (read my blog post on the USA Today). 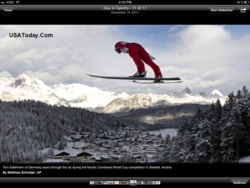 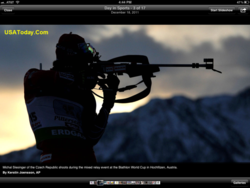 For both NTU and a many newspapers, a common theme was their deaths were slow and painful.

Ending this blog post now would be a cop out. It is always easy to comment on what is wrong, but it is more important to suggest ideas for improvement and move forward. Thus, the rest of this post includes two ideas ... one for each industry. The suggestions are small, and by themselves would not solve the overall problems faced by libraries and encyclopedias, but they do represent attempts to work and move into the future.

First let's address libraries. In theory the future of the library should be rosy. The internet has resulted in an explosion of information. However, there is increasingly little need to actually visit the physical library. Since last Summer (9 months ago), I have not set foot in my local library. However, from all over the world including Europe, I have read hundreds of journals, and downloaded countless books from my library. Thus, you can see I value my library, but it is losing its physical connection with the customer. This loss can be dangerous. It is important for a customer to identify with the product.

Consider services these two services which should cause my library to be worried:

Large buildings are expensive (i.e. libraries), and increasingly providing less value to the customer. In addition, in a virtual world, town, city or state geographic boundaries which currently define / limit a library's customers make no sense. Organizations like Amazon or Pixel of Ink do not see physical boundaries. The Kindle Fire was sold below the cost of production ... think about it!

What if your local library (or mine) got rid of their bricks and mortar, and instead entered into an agreement with a coffee house chain like Starbucks? The coffee houses already have physical locations, and provide wireless access. Librarians could maintain hours at designated coffee houses where they could help patrons access the library's web based services. Think of a library kiosk at one of your local coffee houses. The idea may seem a bit crazy, but it represents a different way of approaching the distribution and customer idea.

My second proposal relates to encyclopedias

Back in September of 2010, I published a blog post titled The Art of the Browse. In that post I lamented whether I could find it in my heart to give away my World Book Encyclopedia. You see, I like to take a encyclopedia vloume off the bookshelf and read ... to browse the letter "Q", or "T". In the Fall of 2010 there was no web solution to this problem, but the world has since evolved ... enter the Wikipedia Make Book Capability! Britannica should take a hint!

Here is how create you may manufacture your own Wikipedia books. Later I'll provide examples I created.

Here are four screenshots outlining steps #2 through #5. Click to maximize. 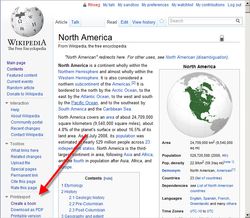 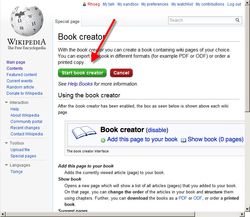 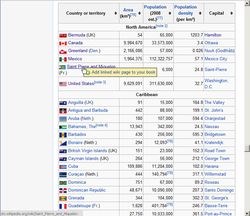 These are just two examples of browsing an encylopedia. In my case, I can now put my feet up on the couch and read encylopedias via my iPad. The Art of the Browse is back! For instance, did you know that two different European countries still have colonies in North America (the northern tier). Read and learn!

Here is more information on the Kindle and GoodReader apps:

The Kindle app also works with my Kindle Fire! The first screenshot shows how easy it is to send your personal Wikipedia encyclopedia to your Kindle. The second screenshot is from my iPad. I'm reading the Encyclopedia Minnesota! Like always, click to maximize. 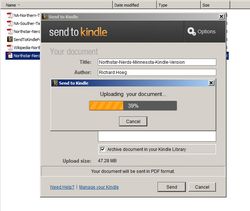 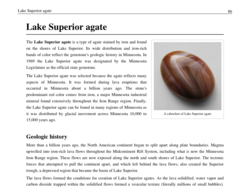 Hopefully these ideas show there are always ways to respond and take advantage of the internet. Sitting back and waiting insures another organization will overtake you!

While compiling my Garmin data earlier today for this Winter's Nordic skiing, I discovered I was 5 kilometers shy of 1,000k. How could I resist? Out came the waxless classic skis I drove off in search of snow. After a short hike into the woods, I found about one kilometer which ranged from snow to ice to slush, but was very skiable.

My Winter's results now total 1,001 kilometers with a total elevation gain of 40,051 feet. All of this skiing was classic in the Lake Superior region. Click the image given below to see more details. 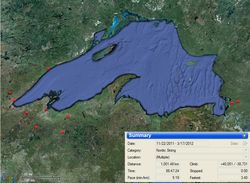