What a perfect way to start the July 4th holiday than with a bike ride up the Northshore of Lake Superior timed perfectly for me to arrive at Stoney Point just as the full moon would make it's appearance on July 3rd. The fact that Duluth had experienced a 90F plus day with high humidity gave me all the additional incentive to hold off with my bike ride till dusk. (Wikipedia: North Shore of Lake Superior)

The real goal for my ride was to photograph the full moon as it rose over Lake Superior. Take my word for it; it's darned difficult! One's major problem is dealing with a brilliant white globe surrounded by darkness while still getting some context and color into the photograpic composition. I'm still learning!

Thus, at 8:15 pm I started my 30 mile bike ride up the shore via Scenic Highway 61. I planned to rendezvous with the moon at Stoney Point. Thankful that I had waited till the day's heat and humudity had "cooled" down to 80F, I biked off into the gathering dusk .. appreciative that this particular highway had a huge shoulder. I was able to bike far away from the traffic, and my red flasher was easily viewable by drivers. There was only one scarey cycling incident all night when I almost biked right into a bridge abutment. The headlights of an oncoming car had blinded me, and I missed seeing the narrowing of the shoulder.

Arriving at Stoney Point, I unstrapped my tripod from bike and got to the process of taking photos. Although I tried many options ranging from full programming of my camera including the manual setting of the aperture, exposure and ISO speed, in the end my best photos resulted from using HDR photography. In short, I picked my desired aperture setting and then took three bracketed photos ... Normal, under, and over exposed photos. Learn more about HDR photography via an earlier post on my blog.

Overall I spent about a half hour at Stoney Point, both taking photographs and just enjoying the blood red full moon as it came up over Lake Superior. By this point it was time to head home. Early the next morning I decided it would be fun to follow my full moon ride up with a sunrise bike ride. Thus, even though I had only returned home from the prior night's ride at 10:30 pm, at 5:30 am. I was once again off on my bicycle. This time I biked into town and to the Duluth harbor. The view of the freighter reflecting the sunrise while anchored off the Duluth Ship Canal intrigued me.

Here is a photo from each ride plus a sunrise photo taken the weekend before on Northstar Lake near the Minnesota - Canadian border! Click upon any photograph to view at full resolution. 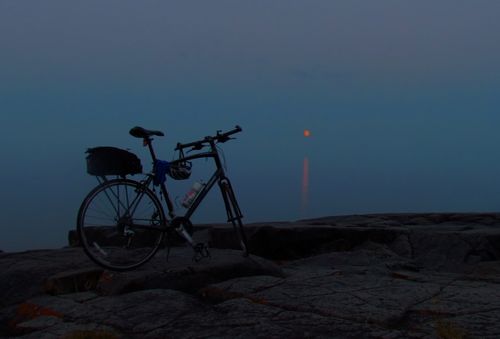 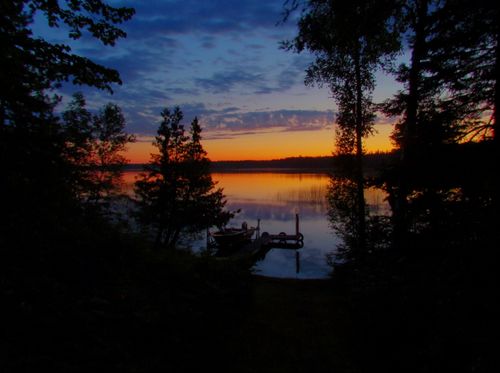 Posted at 07:20 AM in Northern Life | Permalink