It's time for my third update, and so far this test is going very well. Here are my observations of the combined Republic Wireless wifi / cell service:

The next part of my test was conducted at my permanent home in northern Minnesota, on the edge of Duluth. Even though cell phone calls are possible up here, my location is not an "optimized" location for Verizon. Today's test involved phoning my manager in Morristown, New Jersey. I had him use his "land line" office phone. Thus, I hopefully removed the issue of a cell phone talking to a cell phone. Once again, making my phone call via Republic Wireless and wifi was the clear winner. When connected via Verizon, I was missing about every 7th to 8th word, and my boss said I would occasionally break up. When I then phoned back immediately using Republic Wireless and my wifi, the conversation never dropped word. Once again, the actual quality of my voice had a bit of a "tinny" sound. However the exerience was much more pleasant on both ends as the entire conversation was heard ... word for word.

Remember, my tests may not equate to results you would have, but so far ... so good. The other test I conducted today was my first use of the community forum. Republic Wireless does not have a call center to answer questions for the customer. Instead all users help each other via an online forum, with tech support employees from Republic Wireless occasionally also posting. Here was my problem:

My final test will be from northern Minnesota near the Canadian border. Neither service is supposed to have coverage where I will be headed. However, I know from past experience if I walk down to the lakeshore and out onto the dock, I can make a Verizon phone call. Let's see how Sprint / Republic Wireless compare in the backcountry.

Here are two screenshots ... one of my Verizon Droid Incredible V1, and my Republic Motorola Defy XT. However, the basic takeaway is these are both similar smartphones in terms of capability running the same version of Android. Neither has the latest and greatest capabilties, but that does not concern me. The feature sets are darn similar, and therefore I had  a very short learning curve to start using my Defy XT. When I received my Republic Wireless Defy XT on Wenesday, I had it up and running within a few minutes. The only two questions I had to answer during the setup were:

The nice part of using my Google account, is I instantaneously had all my contacts and data on my new phone! That was sweet. However, this would be the same if I was moving to any new Android phone and authorized my Google account. This experience is not unique to Republic. 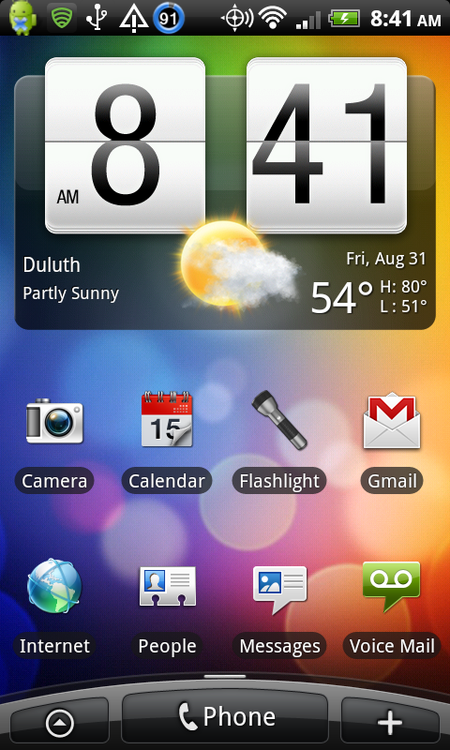