I joined 8,121 of my best friends and skied the 2013 Birkie yesterday. There were four races, and I competed in the 54 kilometer Birkie Classic (33.5 miles), which is the longest race. During the race I wore my GoPro camera mounted on my back and took timed photographs every 30 seconds. Here are the best of those photos. Some of the initial photos have snow smudges on them. I was tripped up by another skier during the mass start. Thankfully another skier called me over and cleaned my lens, and the residual snow eventually melted off from my body heat.

Here are a few photos which give you an idea of what it's like to ski this event. I finished the 54 kilometers in 4 hours and 49 minutes. Considering I've been dealing with a medical condition and was in the hospital emergency room just a little over one week ago, and only received the green light to race on Thursday ... for a man just shy of his 57th birthday I'm thrilled with my results (learn more about my personal ordeal).

Click upon any image to view at full size and resolution. In general these photos are of Classic Wave 3, and after the two trails merge later in the race, also include Skate Waves 4 and 5. Conditions were slow yesterday due to the seven inches of new snow that had just fallen within the past 24 hours. However, the new snow made for a Winter Wonderland! 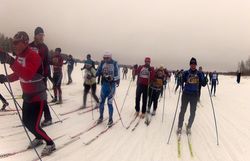 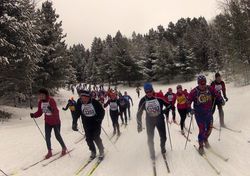 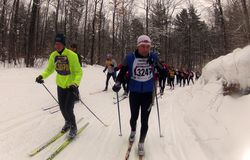 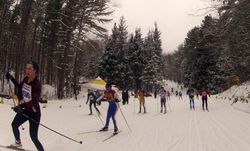 Birkie Warrior and the Classic Only Trail 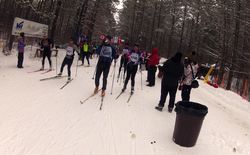 Bitch Hill had a curvaceous leprechaun at the summit to greet the skiers!

The finish on Main Street in Hayward! Our Birkie! (left to right)

Me, Molly (my wife), Erik (my son), Pastor Greg: Everyone else but me did the 50k skate, while I skied the 54k classic. Congrats to Erik and Pastor Greg on their first Birkies! 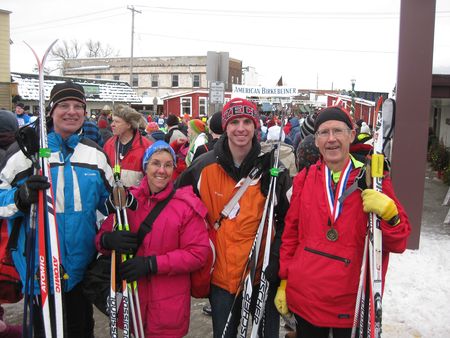 Posted at 07:39 AM in Northern Life | Permalink

That leprechaun touch was my favorite moment during the race - on top of the Bitch hill at about 43K. I was still feeling ok, and for some reason I assumed that there would be no more hard hills.
The next hill was a nasty surprise and I started loosing the spring in my step... http://runkeeper.com/user/dickey/activity/151649210