Lake Superior Waves: A Flipboard Online Magazine celebrating the people, wildlife, and their natural surroundings along the Minnesota shores of Lake Superior.

Imagine reading about both Flamenco Dancing on the Northshore AND Indigo Buntings! These are just two examples of recent articles. Yours truly, the NorthStarNerd is the curator.

Want to learn how to create your own Flipboard Magazine? See my earlier post which includes instructions and annotated screenshots, but first subscribe to Lake Superior Waves! 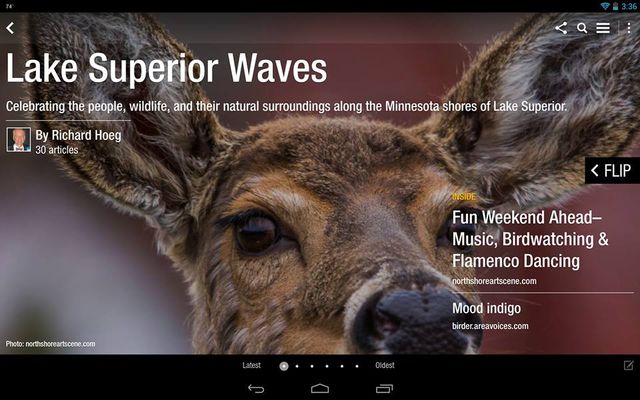 Building Wooden Boats ... A Becalming Link to our Past

Lake Superior, after 57 years on this earth it gets in your veins. Thus, one can easily understand the allure of the wooden boat builder. Not only do these fine craftsmen build superior sailing and paddling crafts, but a bit of their soul goes into every boat. Enjoy the short video embedded below about a man who builds boats in the old tradition in the shores of Anacortes, Washington. If only for a few moments, my hope is your hectic life will be calmed.


If you find you enjoyed that video, please consider subscribing to my Flipboard Magazine, Lake Superior Waves. Both the magazine and app are free. There are no hidden costs. If you are not familiar with Flipboard, it is one of the leading Android and iOS news/magazine reading apps. Thus, in addition to reading Lake Superior Waves, you are able to read content ranging from the New York Times to TechCrunch (and much, much more) via your tablet or smartphone. 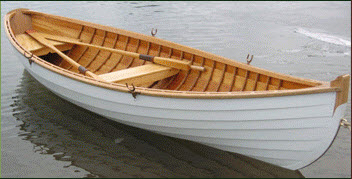 Like Washington state, here in northern Minnesota we also have a fine tradition of boat building. The image shown above is of a boat built at the Stewart River Boat Works. I just "flipped" all three items linked below into my new magazine. Please subscribe! It's free and will help you follow what makes this region great. The byline is: "Celebrating the people, wildlife, and their natural surroundings along the Minnesota shores of Lake Superior."

And here is the video. Enjoy!

Shaped on all Six Sides from New Canada on Vimeo.

In two days, my wife of 30 years and I will start our wedding anniversary bike tour. Leaving from Prescott, Wisconsin near Minneapolis and St. Paul, we will bicycle approximately 500 miles over the next week along the upper Mississippi River, with a short side trip into the Amish country of southeastern Minnesota. Our trip along the Father of Waters will reach as far south as Prairie du Chien, Wisconsin. Other trip journals seem to indicate that if one ventures farther south along the Mississippi River, the roads actually move away from the river, and the cities get much bigger (not fun for cycling).

You may read my daily trip journals via the Crazy Guy on a Bike Portal. We will be bicycling May 18 through May 25th. (please consider posting wedding anniversary best wishes on our Crazy Guy guest book!)

My wife will also be blogging about our trip:

Even better, the advance forecast shows that the looooooong Winter has ended. Temperatures should range between lows around 50, to highs of 80 degrees. Our plans are to camp 1/3 of the time, stay in motels 1/3 of the time, and also use WarmShowers.Org for the first time (another 1/3 of our nights).

Believe it or not, we will be camping the actual night of our 30th Wedding Anniversary! Wish Molly and me Happy Trails! We will end the ride at our daughter's house in suburban Minneapolis. As we cycle up, she will be hosting a anniversary BBQ. Sweet! 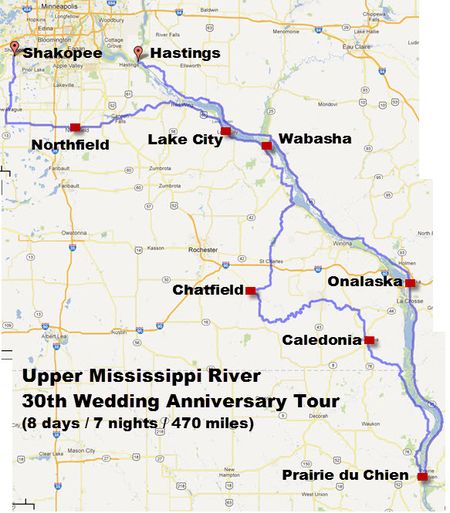 The Biking Photographer ... A Rolling Photoshoot at 12mph

As a photographer, I am only an amateur, but I have one BIG advantage over many of you with similar proficiency taking pictures, I ride my bike! Sound like a strange statement? It isn't! While most of you plan a photoshoot at home, and then drive to a location, I experience the world with all my equipment at 12 mph from the saddle of my road bike while taking 20 to 40 mile rides.

Whenever I mount up, I have the following equipment in addition to cycling gear: My Canon SX40 and a monopod. With these two items I am able to both get a nice workout, but also stop whenever a photo opportunity presents itself. The monopod is important because it allows me to zoom in on all kinds of items, without having to worry about holding a heavy camera motionless given the weight of gravity. All of this gear will be with me when I cycle the 2,000+ mile Grand Gaspe Tour later this Summer! 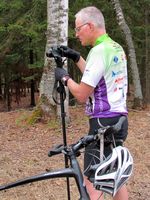 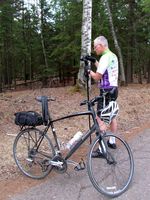 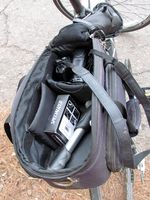 Yesterday evening was a good example of how I use these tools in conjunction with a bike ride. Two hours before sunset, I decided to ride down to the Duluth harbor entrance. While cycling towards canal park, from two miles away it became obvious to me that the setting sun on the ocean freighter anchored in the open lake, and the two lighthouses which sit upon the end of the canal piers would be aligned nicely and have the "golden hour" light upon them.

Once the decision was made to take this photo, it was just a matter of biking until I found the best angle. In fact, I jumped off my bike twice and took photos before I got the one shown below (my favorite ... click to view at full size).

Here is the monopod strapped on to my bike day bag which allowed me to both zoom in and hold my camera steady enough such that camera shake was eliminated (tired arms). 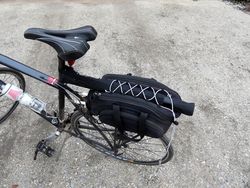 Here is one more example from ten days ago. While biking up the North Shore of Lake Superior near Split Rock Lighthouse, I spotted a small waterfall shooting out from a cliff into the lake. There was a rockly island in the distance, and given the deep blue sky, a perfect photo opportunity. However, the key fact is later in the day I discovered from a worker at the near bye state park that the small waterfall which I had photographed only appears a few times per year ... including during the snow runoff from the Spring melt (the day I was bicyling). From the highway at 60 mph one would never see the small waterfall, yet from the bikepath at 12 mph ...

Here is the scene in question. Click to view at full size. 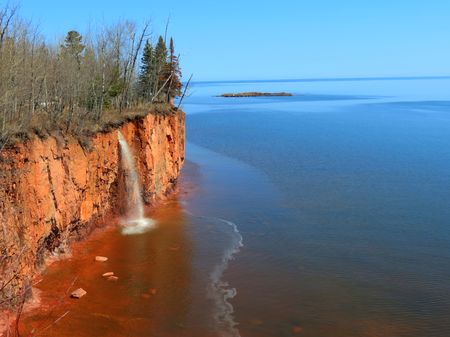 A Burst of Scarlet for Supper!

It's been a good week for the birds. This Pileated Woodpecker joined us for dinner. While it ate ants, we had chicken!

In addition the Goldfinches returned to the Northwoods today. Perhaps Spring is finally here. Just a touch of snow left in the yard! However, the Buffleheads are still stalled out down at Brighton Beach (Lake Superior). They should be up to the Canadian sub Arctic by now. All the lakes are still socked in with ice from this point north. 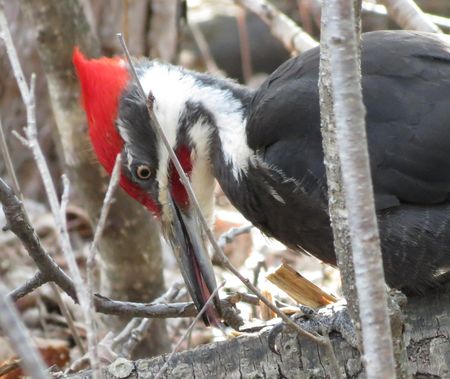 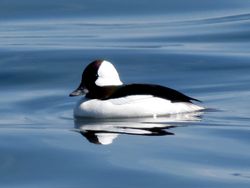 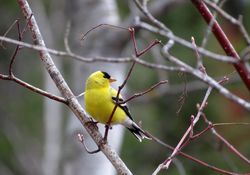